Hunters’ Song, from Album for the Young (violin and piano) level 2.5

Title: Hunters’ Song, from Album for the Young

Note: A useful solo for students working on second position and playing in flat keys. Fingerings utilizing second and third positions are given, but the entire piece can be played in first position as well. Skills required are comparable to those in Suzuki Book 3, with the exception of one passage in  second position that is easily playable in first position. It serves well as a supplemental piece for students beginning to learn the middle positions.

Skills: 6/8 time; key of F Major; B flats on A and E strings and F naturals on E string; two passages in third position; one passage in second position that can be refingered in first; hooked bowing; staccato.

Be the first to review “Hunters’ Song, from Album for the Young (violin and piano) level 2.5” Cancel reply 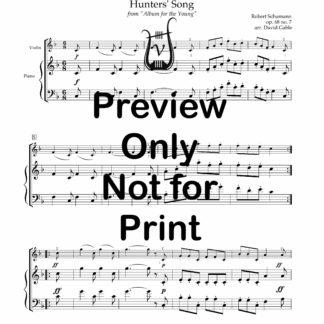