Title: Habañera, from the opera Carmen

Note: It was Bizet’s intent to base some of the music in Carmen on Spanish folk idioms, and initially he thought that the song El Arreglito, which he used for this aria, was traditional. He later learned that it was in fact composed by Spanish composer Sebastian Yridier (1809 – 1865) and made a note to that effect in the published version of the vocal score. The habanera originated in Argentina, but quickly became popular throughout Europe. This aria is one of the best known not only in Carmen, but also in the entire operatic repertory.

This setting of the Habañera is included in the Bargain Bundle Carmen, Selected Highlights for Violin, Viola and Cello, Set 1.

The Habañera from Carmen is also available in a trio arrangement for two violins and cello. Click here.

Be the first to review “Habañera, from Carmen (string trio – violin, viola and cello)” Cancel reply 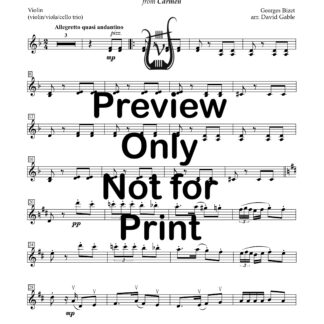