Title: Habañera, from the opera Carmen

Note: The Habañera is one of the most recognizable arias not only in the opera Carmen but also in the entire opera repertory. It is heard in Act I, when Carmen is teasing the men gathered outside the cigarette factory with intimations of love. The melody, which Bizet initially believed to be a Spanish folk song, was actually written by Sebastian Yridier, a Spanish composer of tangos, habaneras, and other characteristically Spanish idioms.

According to scholars, the habañera as a dance form developed from the contradance or contradanza. In Cuba, this traditional form known throughout Europe metamorphosed into the dance known as the habañera, or “dance of Havana” with its ubiquitous rhythmic bass line. From Cuba, the habañera traveled back to Europe and captured the attention of musicians and dancers in many European nations.

The Habañera from Carmen is a must-havel piece for gig musicians, and it is also available in the Bargain Bundle Carmen, Selected Highlights for Two Violins and Cello, Set 1.

The Habañera from Carmen can also be purchased in a trio arrangement for violin, viola and cello. Click here.

Be the first to review “Habañera, from Carmen (string trio – two violins and cello)” Cancel reply 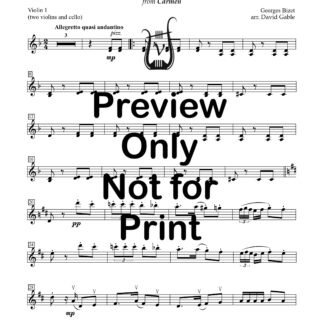