Note: Nicolas Chédeville was well known as a performer on the musette, a small bagpipe-like instrument for which most of his music was written. His compositions are generally light in character, charming and tuneful. In this movement, the two instruments cross registers and exchange motifs almost as if in conversation. Both parts can be played on flute or oboe.

Be the first to review “Vivement, from Sonata in C, op. 8 no. 6 – L’Italienne (violin duo)” Cancel reply 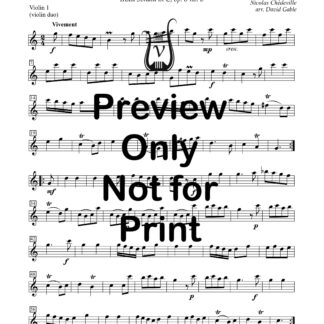