Note: The Cantigas de Santa Maria (Songs of St Mary) is a collection of devotional songs written down during the reign of King Alphonso X of Castile. It is one of the most important sources of early music in the western world. Since the songs were written without metric indications, modern scholars have had to reconstruct their meter. Como poden has been interpreted in various ways, including simple duple meter with syncopations and compound duple with hemiolas in alternate bars. I prefer the latter interpretation, as it gives the tune a dynamic rhythmic drive. All of the Cantigas are monophonic, but I have provided a rhythmic second voice reminiscent of the drones and percussion that often accompanied music in the middle ages. 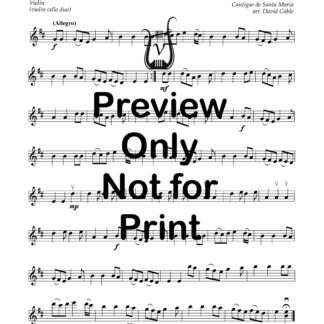