Title: March of the Three Kings

Printout: 9 pages including score and parts

Note: This French Epiphany carol was used by Georges Bizet in his L’Arlésienne Suite. Bizet’s canonic treatment of the theme is preserved in this arrangement. Bizet’s version is also sometimes called “March from L’Arlésienne.” 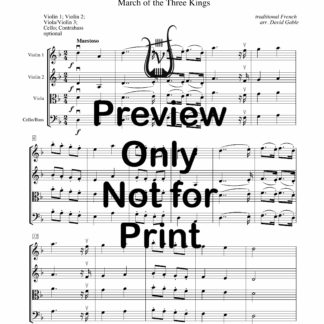 You're viewing: March of the Three Kings (intermediate strings) $5.99
Add to cart