Note: The Habanera is one of the best known arias not only in the opera Carmen, but also in the entire operatic canon. It appears in Act I as Carmen enters the scene for the first time and beguiles Don José with her sensuality. Interestingly, Bizet set out to find Spanish folk melodies when composing the score for Carmen, and when he came upon this habanera he believed it to be a traditional folk tune. He later learned that it was in fact written by Spanish composer Sebastien Yridier, a fact which Bizet then acknowledged in the published version of the vocal score. The melody’s sinuous chromaticism and ubiquitous rhythms are as exotic and sultry as Carmen herself.

Habanera is also available at significant discount as part of the Bargain Bundle Carmen, Selected Highlights for violin and viola, Set 2.

Be the first to review “Habanera, from Carmen (violin viola duo)” Cancel reply 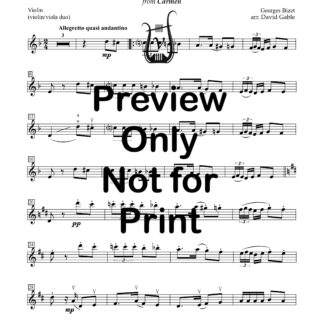